There they stand – stoic and graceful giants – their heads lost in the clouds.

There they stand – stoic and graceful giants – their heads lost in the clouds. You crane your neck to see their faces, but only catch a glimpse of tangled branches through the fog.  You can’t help but wonder – can they see me?  They have stood quietly through our wars and squabbling; it all seems petty in their presence.  Many of these trees are already famous as they are champions of height, girth and age.  Even so, they have stood silently and without complaint, even as we indiscriminately chopped them down.  Lumber corporations have made millions this way.  It is a battle of the giants.

Anywhere you visit in Northern California, you are bound to see traces of redwoods.  Until about 100 years ago, life revolved around this very material.  Children were raised in redwood cribs until they were old enough to sleep in redwood beds. They went to schools made of redwood boards where they sat at redwood desks, and wrote with redwood pencils on redwood paper.  Homes, streets, furniture, even entire cities such as San Francisco, were all made of this seemingly inexhaustible material.  After almost 200 years of harvesting this “red gold,” we are down to the last 5% of these virgin forests.  How did it come to this?

The Coastal Redwood is the world’s tallest tree.  In September 2006, the new record holder “the Hyperion Redwood” was discovered in Redwood National Park, about 250 miles north of San Francisco.  Its height, an astonishing 378.1 feet (over 110 meters) is over eight feet higher than the previous record holder, the Stratosphere Giant.  Many experts believe that there were previously several trees over the 400-foot mark, but as older trees were much more highly prized for the amount of wood they contained, they were often sought out and cut down.

Another distinct type of redwood tree grows in California.  The Giant Sequoia is known for being the most massive tree in the world by volume.  They live about 150 miles to the east in the Sierra Nevada range.  Often confused, Coastal Redwoods and Giant Sequoias are related, but live vastly different lives.

Coastal Redwoods, or Sequoia Sempervirens, grow in a 40-mile wide, 500-mile long strip of coastline from Monterey county in the south, until the border with Oregon in the north.  The reason that they do not grow in other countries, states, or even Los Angeles in southern California, is the fog.  A mature tree can drink 500 gallons (1900 liters) of water every day, so they must rely on the “fog drip.”  Redwood leaves are creased in the middle and point downward, so as the ever-present fog comes in from the Pacific Ocean, it collects on the leaves and drips onto the ground, where the tree then consumes it.    Because of this, redwoods have no taproot, but instead are hollow underneath.  In fact, their largest roots are only one inch in diameter (2.5 cm) and extend horizontally as opposed to vertically.  Roots from multiple trees interlock and form a web, or support system, preventing the trees from toppling over.

These giants, as with most evergreens, are born from an olive-sized pinecone, containing about 125 individual seeds.  There can be as many as 300,000 seeds per pound, (650,000 per kilo) and each seed is capable of producing a one million pound tree.  99% of seeds never germinate, but for the ones that do, the first few years are the most problematic.  Animals can eat or trample seedlings, floods or harsh weather can wash them away, or they can die from lack of sunlight on the forest floor.  Once a young redwood reaches twenty years of age however, it begins one of the fastest growth spurts known in the plant world.  By the time the tree is fifty, it can be up to 100 feet high.  By age 200, it can stand over 350 feet tall!  Redwoods grow to this height to compete with the existing canopy level.  In other words, isolated trees, like ones planted in backyards, only attain the height of an average tree, as they easily receive full sunlight.  Once it reaches its prescribed height, it invests its energy in thickening its trunk, which may be quite slender compared to older trees around it.

Redwoods are unique in their ability to grow from burls – the regenerative budwood located around the base of the trunk.  If wind or lightning knocks a tree down, hundreds of sprouts will form in a ring around the base and race upwards to fill the hole in the canopy before the injured tree loses the chance to get sunlight.  These are called “fairy rings” or “family circles.”  95% of the virgin redwood forest has been cut down, but it is not to say that there is only 5% left.  The distribution of redwood forest has only decreased by 100,000 acres (40,000 hectares).  However, most of what is left are younger trees or “family circles.”

All plants need to be green, and possess chlorophyll essential for the production of food.  Because of the redwoods rare regenerative process however, they are one of the few trees that can be albino.  These albino or “ghost” trees are parasitic and steal food from the parent tree since they have no chlorophyll of their own.  For this reason, they never get more than a few years old.  Nevertheless, they are a strange and beautiful sight to see as they have white leaves and bark.  Many locations of albino trees are kept secret, as people sometimes hurt the trees by ripping off branches to take home. 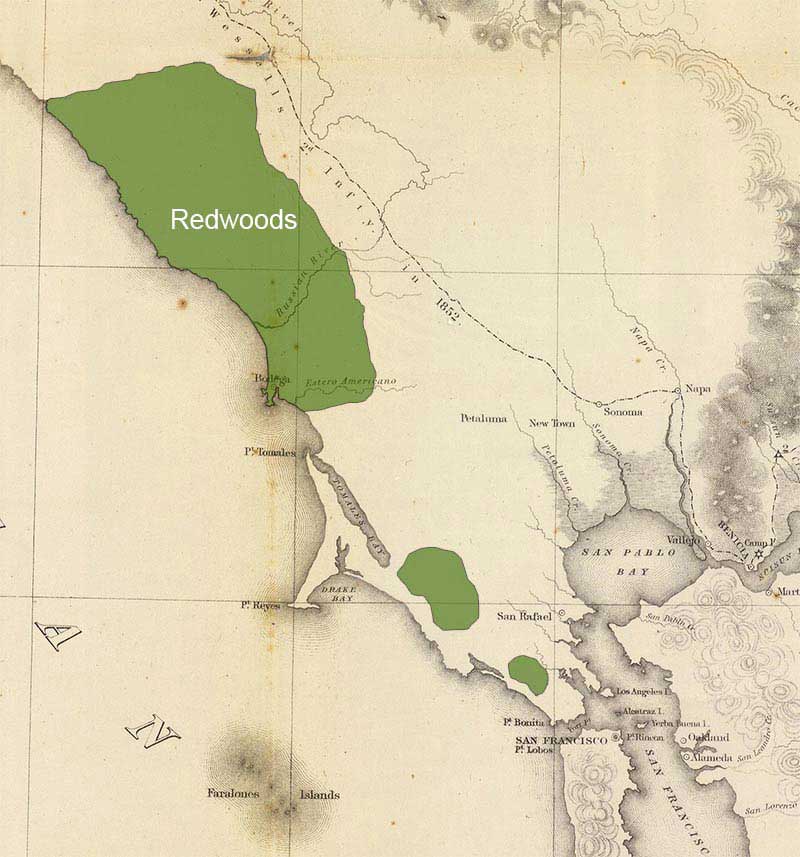 Redwood bark can be one foot thick and is extremely resistant to fire, but sometimes branches and other debris accumulate around the base of the tree.  In the event of a fire, they can burn a hole through this protective layer leaving only an empty shell.  Early settlers would sometimes build a gate across the opening and keep small livestock there, giving rise to the term “goose-pens.”  Some of these caverns can be quite large; there is a famous photograph of 109 fourth grade students inside a tree, and another one of a car driving through.

California was made the 31st State in the union on September 9th, 1850, and the natural choice for the State tree was the redwood.  Early Spanish settlers used these tall trees as markers when navigating the California coastline.  The earliest written record describing “Palos Colorados” were made by Father Juan Crespi in 1769.  Logging started on a small scale in the early part of the 19th century, as axes were not long enough to tackle such huge trees – but not for long.  Modified long-axes gave way to “misery-whips” (22-foot long saws), until gasoline-powered saws took over in the twentieth century.   Each advance in logging technology spelled disaster for the forests.  Centuries-old forests were clear-cut into the mid-1970’s, until it became apparent that something needed to be done.  Several environmental groups, such as the Sierra Club, Save the Redwoods League, Earth First, and the Sempervirens Club intervened, and battled lumber companies in the field, in court, and through protests until the last remaining tracts of old-growth redwoods were saved.

The goal of lumber companies has always been to maximize profits, however in today’s world, they must respond to larger ecosystem concerns, such as watershed and wildlife protection.  Redwoods are still logged today, but much more responsibly.  The majority of redwood products are harvested from farms, which utilize younger trees (one hundred years old or less.)  Selective logging is also employed, where only 5 to 10% of trees per acre are cut down.   These new practices will hopefully ensure that future generations will be able to enjoy the grandeur and beauty of the coastal redwood.