About Our Sommelier Guides 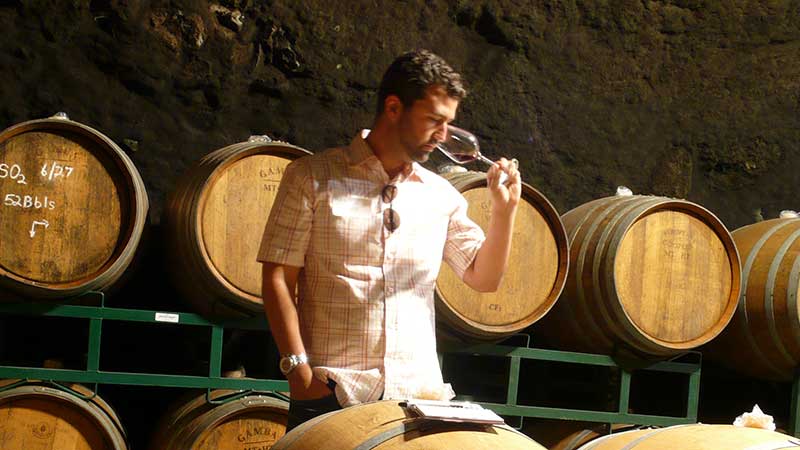 Max was born in Michigan, but had an international upbringing, growing up in Italy, Canada, Arizona, and the United Kingdom. Wine was always a topic at the dinner table, and Max grew up thinking that all eight-year-olds knew the good years of Bordeaux! After finishing college in February 2004, Max moved to San Francisco to work as an architect, and immediately became fascinated with California’s wine country.

“After working as an architect in downtown San Francisco for about a year, I decided that it was time for a change, although I had no idea what that change might be. I left the firm, and on my last day a couple of work buddies took me out to a nearby bar for some drinks. A conversation about the wine regions of the world with a stranger sitting next to me led to a job offer as a guide doing wine tours!

I decided that I would take him up on it (at least temporarily until I found another architecture position). All of a sudden a year had gone by, and I realized how much I loved what I did. Being outside in vineyards everyday became my new office. I enjoyed pairing people to wineries – the way that a sommelier pairs wine to your meal. Being in business for myself seemed like the next logical step…”

And so Max Napa Tours was founded by December, 2004.

Max became a Certified Wine Professional (CWP) in 2010, a Certified Specialist of Wine (CSW) in 2011, a Certified Sommelier in 2012, obtained the Wine and Spirits Education Trust (WSET) Advanced Certificate in 2013, and is one of the first Italian Wine Scholars in the USA. Max is currently finishing up his WSET Diploma (one more test to go!). His other company Blue House Wines (https://www.bluehousewines.com/) imports wine from Italy.  He has also made wine at home.